PRETORIA, South Africa, 8 July 2022 - Ford Motor Company's R15.8-billion investment in its Silverton Assembly Plant operations in Pretoria is coming to fruition, with the completion of one of its largest and most ambitious projects to date - the high-tech new Stamping Plant, which is now in operation. The vast facility measures a staggering 10 320m2, equivalent to almost 1.5-times the size of a standard soccer field (7 140 m2).

"Previously we used external suppliers to stamp our metal body parts, but we decided to set up our own Stamping Plant for the Next-Gen Ranger, which will go into production later this year."

a 1 600-ton press and three 1 000-ton presses that stamp the flat sheet metal into the various inner and outer body panels required for all three body styles of the Ranger: Single Cab, SuperCab and Double Cab. The presses are housed in a complete sound abatement enclosure to significantly reduce the noise generated by the stamping operations, with an automated inter-press feeder system transferring the stamped panels along the process to the end of line. The entire line is fully automated, with an installed capacity of 16 strokes per minute. 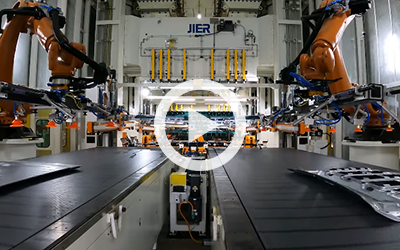